The existing Santa Barbara City Police Station, located at 215 East Figueroa Street, was constructed in 1959. Since that time, there have been substantial increases in both City population and Police Department staff. In addition, the building does not meet modern seismic safety and accessibility standards. Together, growth and insufficient building standards have created the need for a new, accessible, and modernized facility.

As part of the Preliminary Environmental Review process, multiple sites were evaluated as potential locations for the new Police Station.  The respective properties considered and evaluated during the preliminary environmental review stage are outlined and described in the Site Selection accordion.  The culmination of this work was a recommendation for the Cota Commuter Parking Lot to be the preferred site alternative for environmental review for the new station, which City Council ratified on September 17, 2019.

Documents related to the full Environmental Review of the Cota Commuter Parking Lot are located in the link below.
Police Station Environmental Reports - Community Development

The plans for the Development Application Review Submittal (schematic design) are located in the link below.

Why is the City working on a new police station?

What’s the process for creating a new police station?
Building Needs
Architects that specialize in police stations (MWL) were hired along with local architects (Cearnal Collective) to determine the building specifications that fit Santa Barbara and the needs of our officers.

The technical architect confirmed the current and predicted needs of a new police station (also studied in 2011) to combine operations from four separate buildings into one, well-functioning station.

A Site Criteria checklist was created based on the conclusions of the programming data.

Building Design
After site selection is was made to begin the environmental review, project architects began preliminary drawings for the new police station at the preferred site. The Environmental Review requires 30% drawings to evaluate any potentially significant impacts.

Building design will continue and a joint concept review will occur with the City’s Architectural Review Board (ABR) will hold a concept hearing, followed soon after by a concept hearing for the Planning Commission.

Project Approval
The overall project will go in front of the Planning Commission for project review and approval.

What are the main sites being studied?

What are the main site considerations for the new police station?
Size, secure parking for officers and staff, located within the high volume call area, zoning, height limits, access – for officers and the public, proximity to the courthouse, and existing site conflicts.

Which site appears to have the fewest conflicts with existing uses?
Based solely on initial criteria, the Cota Street Commuter Lot potentially has the fewest conflicts with existing uses while having sufficient functionality for a new police station. Before a decision could be made by City Council, City staff needed to complete a preliminary environmental review of the sites under consideration.

An initial review indicated that the Cota Street Commuter Lot has a size that fits, can accommodate staff parking, has the building height limits needed, is within the high call area, and has good proximity to the courthouse. It does have conflicts with the current uses of commuter parking and the Saturday’s Farmers’ Market. City staff are in discussions with the Farmers’ Market about what their market needs to be successful and other locations that could work for the Saturday Farmers’ Market similar to the markets on other days. Those discussions, as well as other parking locations for commuters, will continue.

How long will this process take?
Any new building in Santa Barbara takes a few years. The new police station will go through the City’s regular environmental, design, and permitting processes. A new station could be ready to begin construction sometime in 2022. Construction is estimated at two and a half years.

Why doesn’t the City build substations instead?
According to the City’s technical architect, who has experience building over 300 police stations throughout the United States, substation designs make sense if communities meet two criteria:

Santa Barbara does not meet either of these conditions, so a single police station fits our needs.

Substations are also inherently inefficient because they require redundant support and administrative services at more than one location. The redundancies add to the long-term costs for residents.

Our police station is a busy place. Currently, it takes four separate buildings to house operations. Today’s facilities have not been earthquake retrofitted (as required by California’s Essential Services Buildings Seismic Safety Act of 1986) and the infrastructure in the main police building is antiquated. There are insufficient bathrooms for the 26 female officers, cramped interview rooms that are too close to witness areas, and storage constraints that result in a waste of significant time merely getting to equipment.

Santa Barbara Police strive to be a mix of highly skilled officers and effective community partners to help us maintain safe neighborhoods and beach-town charm. In 2017, with the passage of Measure C, Santa Barbarans chose to create a new police station to address the current inadequacies and to support both the special equipment necessities and everyday patrol needs.

The first step in the process was site selection. Key considerations include size, parking, zoning, access to high call areas, conflicts inherent to each site, and the costs associated if the site is not already owned by the City.  The colored map below shows the concentration of calls in a particular area, downtown having the majority of the calls.  Additionally, the chart below is a snapshot comparison of the sites studied. 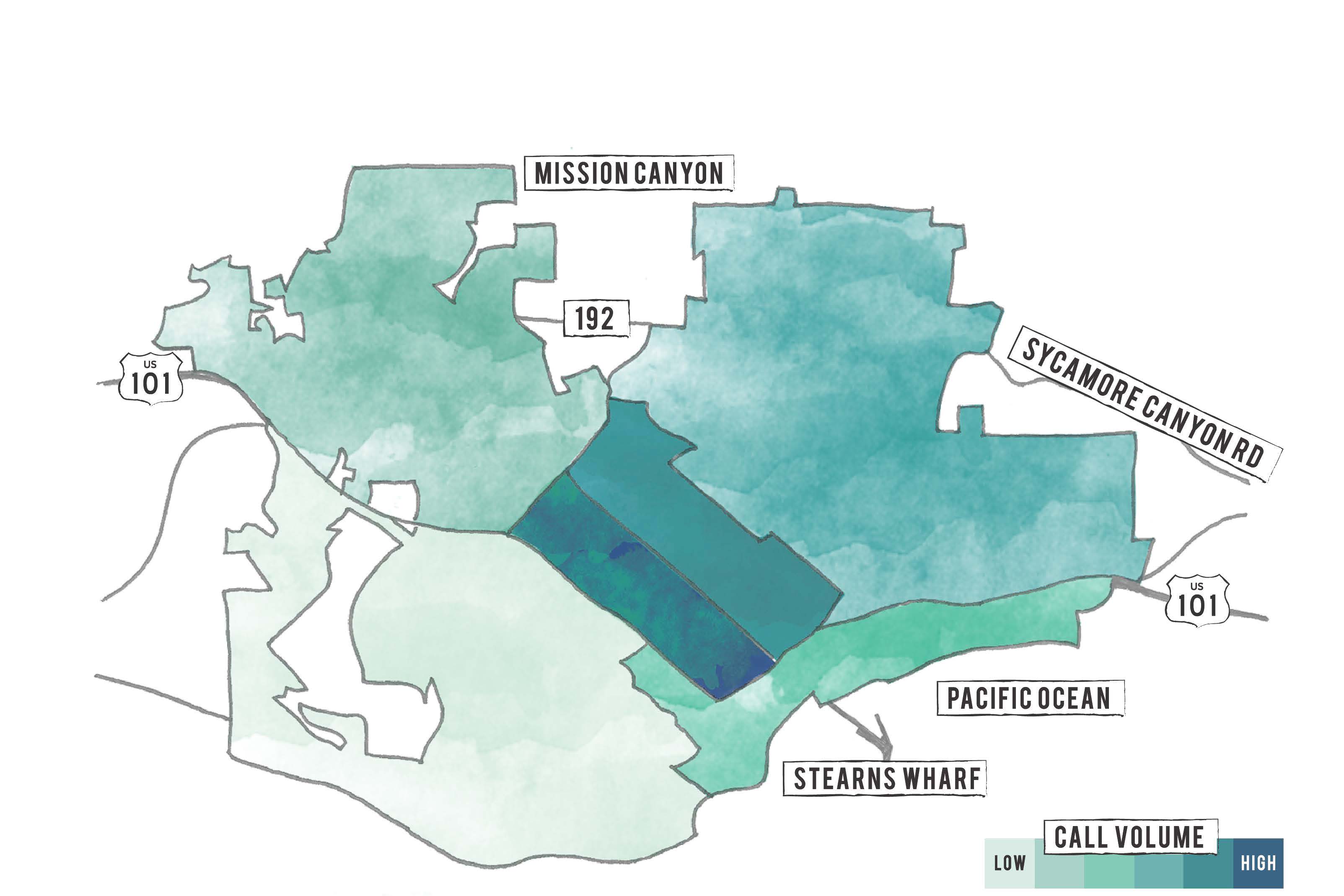