On Tuesday, August 30, 2022, the City Council appointed Kelly Ann Gordon as Chief of Police for the Santa Barbara Police Department. Her new role is effective September 19.

Chief Gordon brings 26 years of experience in policing to Santa Barbara. Most recently, she was the Police Chief for the Monterey Park Police Department where she oversaw a staff of approximately 150, including 78 sworn officers, and a $23 million budget. In this role, she restructured the department’s recruitment and hiring practices to reflect modern policing and to ensure the hiring and retention of personnel through comprehensive selection and training programs. She was also responsible for implementing the Neighborhood Engagement Team, a multi-disciplinary/co-response approach to better addressing mental health needs and working with individuals experiencing homelessness in the community.

“I look forward to serving the Santa Barbara community and being a part of this amazing team of policing professionals and incredible executive team,” Chief Gordon said. “My first priority is to get to know my people in the police department and our community—both residents and businesses. Together we will work hard to continue to strengthen our collaborative relationships, achieve common goals, and remain dedicated to keeping our community safe.”

City Administrator, Rebecca Bjork, shared her confidence in the skill and leadership that Chief Gordon will bring to the role. “Chief Gordon is known for her progressive leadership style, strong communication skills, and her dedication to serve and we are happy to have her join the team.”

She also worked with the Federal Emergency Management Agency (FEMA) Urban Search and Rescue Team for over 20 years and was part of the National Disaster Search Dog Foundation. She was a Canine Disaster Search Specialist, and her deployments include the World Trade Center after 9/11, Hurricane Katrina, Hurricane Ike, and Hurricane Rita.

Chief Gordon has a bachelor’s degree from Cal Poly Pomona and a master’s degree in Leadership from Saint Mary’s University. She is a graduate of the Federal Bureau of Investigation’s National Academy and Sherman Block Supervisory Leadership Institute.  ​ 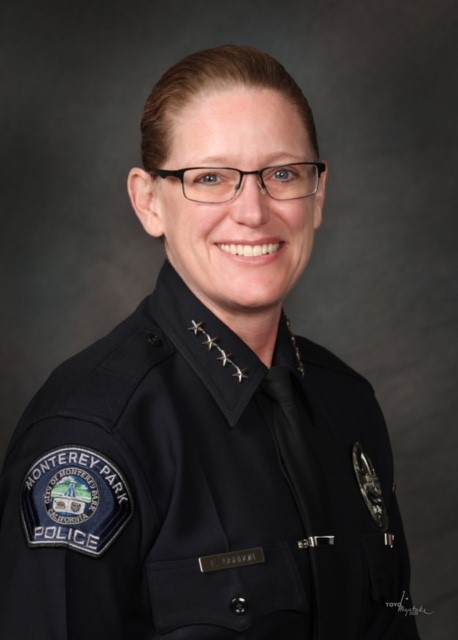